Day two of Elite Foal Auction Borculo led to the amazing dressage foals top lot Vesuvius van ’t Zuyderbosch (ds. Vivaldi). After a spectacular bidding final, this Valverde son with his remarkable uphill movement fell into the Austrian hands of Marianne Jerich. Dutch top-level dressage rider Adelinde Cornelissen represented her former sponsor in the bidding process. “Marianne was very keen on this particular foal. It was so exciting! I’ve bought foals before over the telephone, but never for this sort of amount. The foal will now be going to Austria. And who knows, he might end up in my stables one day. I certainly wouldn’t mind,” Cornelissen added.

The son of world-class horse Desperados, another striking mover by the name of Nashville LMD (ds. Westpoint) also turned out to be popular with the buyers. Eventually the foal changed hands for a spectacular 56,000 euros. The final bid came from Jan Pieter Dalsem.

The most expensive filly will also be staying in the Netherlands. Having acquired seven foals already, Jan Kooi and his wife and (step-)daughters also pulled out the longest stick with the beautiful Nina Fleur van de Paulinehoeve (For Romance x Jazz), who changed hands for 36,000 euros.

Nuance GS (s. Franklin) and Next Deniro H (s. De Niro) were also sold with significant numbers, respectively 29,000 and 27,000 euros. Foreign buyers seemed to take a special interest this year, with partakers even from more exotic places. Dutch mediation got the Province of Overijssel champion Naluciënne STMT (v. Quantensprung) her new owner from Dubai for 19,000 euros and buyers from Taiwan also seized the opportunity, something the Australian buyers didn’t succeed at this time round. The Scandinavian representation led to a purchase from Denmark.

Still bewildered at the impact of his breeding Vesuvius van ’t Zuyderbosch, breeder Elbert Pater from the Dutch Voorthuizen couldn’t really grasp yet what had just occurred. “I can’t believe this is happening to my foal. Vesuvius is the very first foal I have ever had auctioned. It just doesn’t get any better than this.” He adds with a smile: “Perhaps I’d better stop breeding instantly.”

The dressage foals’ sale marks the end of the 2018 National Elite Auction Borculo. Over two days, Koen Olaerts’s auction hammer fell for 63 showjumping foals and 65 dressage foals. The foals this year were sold for an average of 11,490 euros.

Please look here for the full results of the dressage foals. 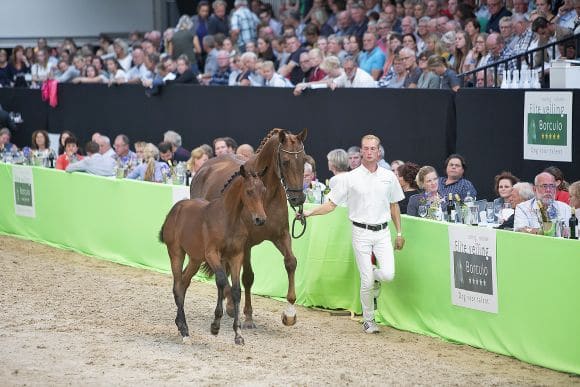 Packed stands during the auction in PSC Lichtenvoorde