The sale of Vesuvius van ‘t Zuyderbosch was undoubtedly one of the big highlights of the 2018 Elite Foal Auction Borculo. Elbert Pater (picture, 5th on the right) was the happy breeder of this phenomenal colt by the sire Valverde. The man behind Stable ‘t Zuyderbosch in Voorthuizen, Netherlands, couldn’t really grasp yet what had just occurred. ‘I can’t believe this is happening to my foal. Vesuvius is the very first foal I have ever had auctioned. You need to be lucky to have two wealthy people in a bidding duel like this. It’s unbelievable and how nice that Adelinde Cornelissen is involved.’

In regard to his horses Elbert Paters is being advised by Eugène Reesink. The member of the dressage selection committee had already soon his eye on Vesuvius. He says: ‘Stable ‘t Zuyderbosch is still a young stud farm. They bought a couple of mares from me, among them the dam of this foal. She got injured in sport and I sold her already in foal by Valverde. I knew there was lots of interest in this foal but this is something you don’t expect to happen. Nevertheless it has been an exceptional foal directly from the beginning. That’s why we have selected him already very young. He has three fantastic gaits and a lot of similarities with his sire Valverde. To me Valverde is a unique horse: three excellent gaits and very relaxed but also sharp when needed. This is combination is rare in a horse. And how great it is when a foal like this ends up at someone like Jerich!’

‘It was so exciting!’

Adelinde Cornelissen (on picture right) who had Aris van Maanen (bidding, left) alongside her during the long lasting ‘bidding battle’ said Austrian Marianne Jerich was very keen on this particular foal. ‘She already looked at him in advance and she did see this very well. I too find it a particularly good foal. It was so exciting! I’ve bought foals before over the telephone, but never for this sort of amount. Each time I asked neatly if I could bid again and the answer repeatedly was: ‘higher’. The foal will now be going to Austria. And who knows, he might end up in my stables one day. I certainly wouldn’t mind.’ 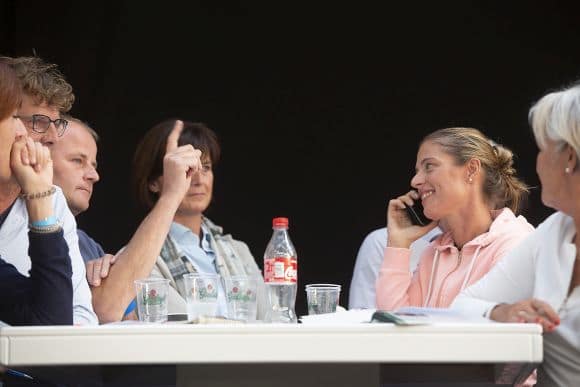