At the end of 2019 it’s the ideal moment to look back at Foal Auction Borculo’s special 40th anniversary, a year in which for the first time no fewer than four different auctions were organized.

The Netherlands’ first ever foal auction in 1979, kicked off 2019 immediately with a new website, a new logo and the announcement of a new auction: the Borculo Online Foal Auction. Top lot of this first edition in April was the appealing Totilas daughter Ooh La La de Flora, out of the dam Beauté GEP (by Negro) and sold for € 14,000.
At the end of May the second edition of the Borculo CSI Foal Auction at Jumping Schröder Tubbergen was scheduled. The highest bid of € 20,000 belonged to Enola’s Emerald Z, a filly by Emerald out of the interesting dam Enola (by Corland).
Then, the Borculo CDI Foal Auction was introduced. During the popular Outdoor Gelderland Dressage Gala in July, a successful first edition ended with a € 35,000 blast. This amount was offered by a German buyer for Ovation, a striking colt out of the first crop of ‘Borculo stallion’ Imposantos and bred out of the dam Querinda von Kukenmoor (by Quantensprung).

Last but not least, the traditional Borculo Elite Foal Auction was on the agenda at the end of August. The jumping foals opened the two-day auction in the PSC Lichtenvoorde accommodation in Vragender. Tavi Z (Tobago Z x Chellano Z) came out as the top lot here. The striking grandson of the famous mare Larthago was sold for € 35,000 to the US.

Of course, 2019 was also about the foals sold in the past at Foal Auction Borculo and their current performances. The highlights at international shows, young horses competitions, stallion shows, inspections and performance tests were again numerous.

At the very highest level in the dressage arena, Zuidenwind (OO Seven x Jazz, breeder H. van Helvoirt/rider Rose Mathisen (ZWE)) was successful again, with i.a. 1st place GP and Freestyle at CDI Stockholm. Another Borculo front runner that made name for himself was the aforementioned Imposantos (Wynton x Krack C, W. Wijnen/Bart Veeze (NED)). At the age of six he successfully defended his Pavo Cup title, became 5th at the World Championships for Young Horses and was winner at KWPN Stallion Competition again.

Already approved High Five U.S. (Charmeur x Negro, Chr. De Feyter Seydlitz) stood out with his offspring. He was represented by five of his sons during the KWPN Stallion Show, after which two were appointed for the performance test. There was also success in the summer when High Five’s son Oristo was crowned champion at the KWPN National Foal Inspection.

At the same place in Ermelo, Lolana (ds. Vivaldi, breeder A. Dijkstra) even won the national championship with the three-year-old mares. Extra special is that Lolana is a by the KWPN stallion Galaxie, previously sold too at Foal Auction Borculo. Finally there was also a fourth place for Lorabel (Glock’s Toto Jr. x Don Schufro, W. Goesten) at the KWPN National Mare Inspection.
That Lolana also excels under saddle, was shown in her IBOP performance test, worth a stunning 84 points. Several other former Borculo foals performed remarkably during their performance test last year. The highlight was delivered by Funkenmarie (For Romance I x De Niro, J. de Baey). She finished her EPTM mare test with the fantastic score of 93 points.

With the overview above we can enter a new year full of confidence. We wish all involved, including breeders and buyers of our top foals, a fantastic 2020, filled with four-legged success! 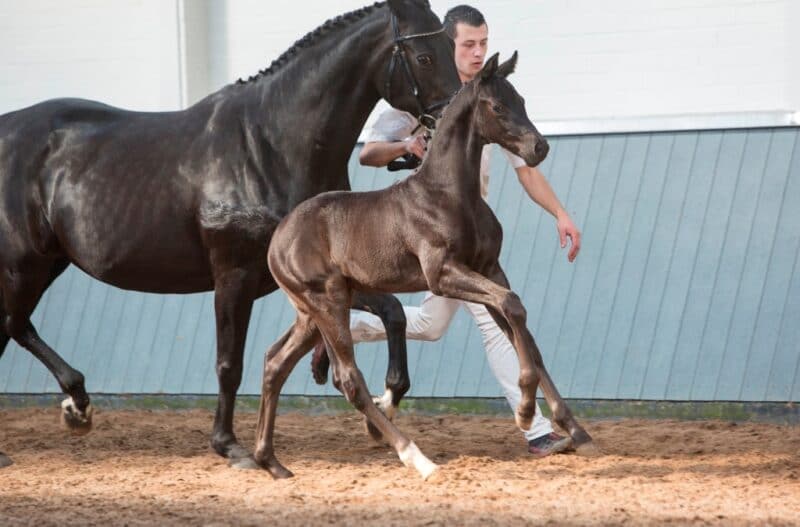 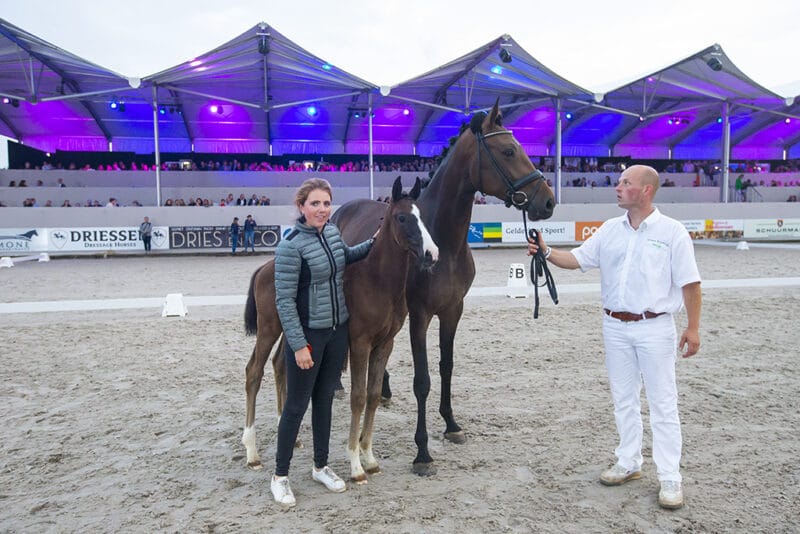