Foal Auction Borculo is known to offer interestingly bred foals out of exclusive sport lineages. More often than not these foals find their way to the highest levels. Take for instance the successful KWPN stallion Kyton (Ferguson out of Wilbria keur pref IBOP-dres by Ferro). Seven years ago, he became the top selling dressage foal of Foal Auction Borculo. This year, he makes his appearance at the WC for Young Dressage Horses in Ermelo. And that calls for an interview with his breeder Willem Goesten.

Willem Goesten of Berkel Enschot is a familiar face in the equestrian sector. He is chairman of the KWPN region North-Brabant and has been successful at breeding jumper and dressage horses for years. “In daily life I am a veterinarian. In fact, working is optional for me as I am long past the retirement age, but I simply enjoy working too much to stop. I like combining the work at my practice with my small-scale breeding program.”

The breeder follows the progress of his breeding product Kyton closely. “Due to my work, I am not always able to attend his competitions. I do stay in touch with the owner Rom Vermunt. He always keeps me updated. Kyton was placed second in last year’s Pavo Cup. It was very special when guest rider Philipp Hess took the reins. It gave me goosebumps and it was a fantastic experience.” 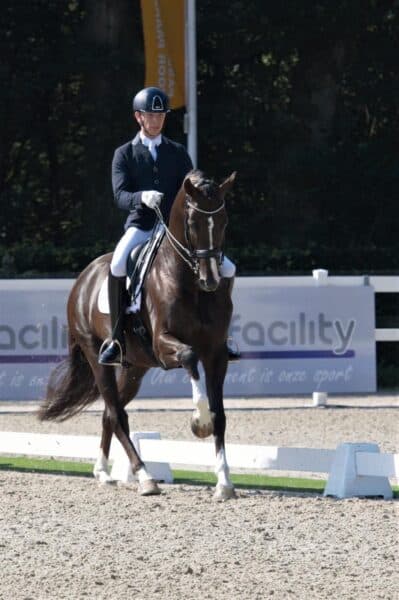 “As a young horse he already demonstrated his aptitude for the more difficult exercises plus he is eager to work. It means a lot to me that he has qualified for the WC. I am very proud. Two years ago, he was also selected but the event was cancelled due to corona. I am currently on holiday, but should Kyton advance to the final, I will disrupt my schedule and try to be there.”

Kyton was auctioned at Foal Auction Borculo as a foal. Willem Goesten is a fan of the auction. “I have already sold multiple foals at Borculo. I think it is a sympathetic auction, with great foals. Both in the dressage and jumping breeding direction. I have every confidence in the committees of Borculo. It was a smart move to recruit Henk van den Broek for the selection committee jumping.” 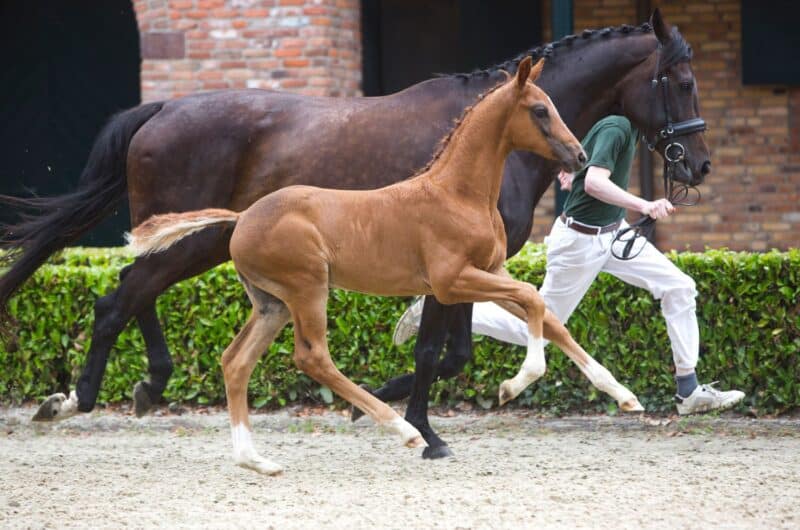 “People sometimes ask me: ‘Why was Kyton sold?’ But I do not keep colts. Besides, we received a sum I did not even dare to dream of.” Kyton was the most expensive dressage foal of 2015 as he generated 31.000 euros.

Despite his young age, he has already built quite the career. The stallion was approved at the KWPN and at the studbook of Oldenburg and is by now the most successful seven-year-old stallion. Bart Veeze and Kyton were crowned champion of the Z2 class during last year’s national championship, they won the ZZ-Licht indoor championships last winter and again received the championship sash for their victory at ZZ-Zwaar level in May. Recently, they extended their list of achievements with a ticket to the WC for Young Dressage Horses.

Goesten’s breeding program currently includes four broodmares. “I breed with three dressage lineages and a jumper damline. I have one horse that is campaigned in sport and one 2,5-year-old.” The damline of Kyton has been in his possession over thirty years. This renowned Bria-line has produced the Grand Prix horses Barbria, Voice, keur stallion OO Seven, Celiton and Blue Hors Don Olymbrio. 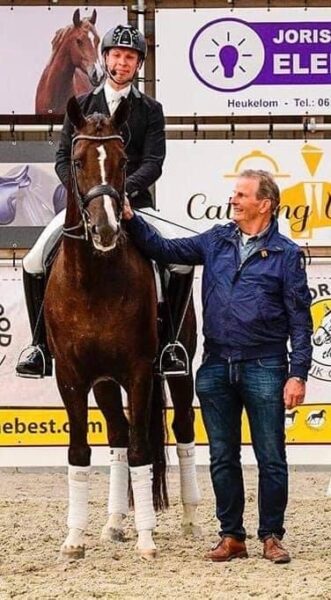 It all started with the keur mare Ezabria (Doruto out of Ilbria keur preferent by Amor), a full sister of the famous Grand Prix mare Barbria. “I was not too successful in my breeding efforts back then. So, I decided to dig deep into my pocket to buy other breeding material. I visited Huub van Helvoirt and he showed me the mares Ezabria and Endy (s.Ulft), the latter later went on to become extremely successful in breeding. I wanted to buy Endy, but Huub asked for such a high price I said: ‘That’s not going to work for me, I’d immediately go bankrupt.’ Huub replied: ‘That chestnut, Ezabria, won’t cost you so much. She is of an entirely different caliber.’ I had seen ‘the chestnut’ at the studbook inspection and thought to myself: well, Huub, I’m not too sure that chestnut cannot measure up to your Endy.”

The sale went through. “At the Central Inspection Ezabria pulled it all out. She was a very athletic horse. She only measured 1.63 meter but seemed 1.70m when she started moving. She truly elevated. We were invited to the UTV and Ezabria was declared champion there. That was a tough pill to swallow for Huub. He wanted her trophy and sash. I said: “You can have them as a memory, but the mare is coming home with us”, quips Goesten.
Ezebria foaled two offspring, including the elite preferente prestatie PROK mare Kilbria (s.Sultan). “That’s the great-granddam of Kyton.” The mares formed the foundation for a successful breeding with multiple international dressage horses.

Kyton’s dam, the keur preferent Wilbria (Ferro x Weyden) is still stabled at Goesten. Besides the approved stallion, she produced five offspring that obtained a predicate. “Wilbria is a very fertile mare. She has produced fourteen offspring so far. This season she foaled a black, athletic filly by Bloomberg. A true ‘Bria’ with those big eyes. It’s a special one, like Kyton was at the time. I am still in doubt whether to sell her or keep her as a companion to an injured foal we have here.”

“Wilbria has turned nineteen this year, but her looks don’t give it away. People often estimate to be about seven years old. The youthful appearance is a characteristic of this line. They are all athletic horses, that are eager to go forward. That’s the type I like: athletic and healthy horses, with a functional conformation. They must exude sport in every aspect, otherwise I will not use them for breeding.”

Wilbria has been residing in Berkel Enschot for eight years, as she only returned at a later age after being auctioned as a foal. “She moved to the Empelaer Stud. When my broodmare Kilbria was diagnosed with arthrosis, I went on a search for a successor. Her granddaughter Wilbria caught my eye. She was barren that year and I was able to buy her back. At the time I was a regular visor of Platinum Stables. They housed the stallion Ferguson. Now, his offspring turn out to be spectacular and they are very successful in sport. They are hard workers that possess functional gaits and a pleasant character. I covered Wilbria with this stallion back then. However, she was in foal to twins. I had to ‘crush’ one embryonic vesicle. Kyton was the one that was left. What a stroke of luck!”

Every year, a strict selection of the best dressage and jumper foals fall under the gavel during the auctions of Foal Auction Borculo. Read more about the auctions here.