The finest foals from Dutch soil are for sale at Foal Auction Borculo. Dressage rider Conny Loonstra is one of our returning buyers that has experienced it for herself. Although it was not planned, she purchased two dressage foals in the 2020 edition of Foal Auction Borculo. And it tasted like more, as she has acquired four more ‘Borculo foals’ since then.

The name Conny Loonstra will probably ring a bell for many horse enthusiasts. She is the founder and face of Dressage Pro. A world-wide online platform that gives dressage riders the opportunity to learn from top trainers. Conny is additionally co-founder of TRT Method, the online training program with the Australian dressage rider and horsemanship trainer Tristan Tucker. In her free time, Conny loves to ride dressage. “I have three dressage horses. One is ranked at ZZ-Zwaar level, and I hope to campaign the other in the Z1-classes in a few months.”

Two years ago, Foal Auction Borculo was organised entirely online for the very first time, due to the corona pandemic. The photo and video day was held at Conny’s accommodation in Acquoy, Gelderland. “I had no intention of buying a foal, but these three days I witnessed merely stunning foals. I loved it. It had been a last-minute decision that year to cover my mare. The veterinary scan was scheduled on the video day. I thought to myself: if she is not pregnant, I’ll allow myself to bid on a foal. The mare turned out to be empty.”

“I quickly went home to have a good look at the foals from behind the computer. I loved the looks of Phinlina Bria WJ. Fun fact, I had not seen her in person. I called my father to discuss it, he is also crazy about horses. He was enthusiastic about the chestnut Priscilla Marein E (Kilimanjaro out of Jacky Marein E elite EPTM D-OC by Charmeur). Eventually, I bought them both.

Philina Bria WJ is an offspring of Fürst Dior, the vice-champion of Mecklenburg. Dam Elbria E (Elite ster PROK by Uphill) originates from the renowned Bria-lineage that, among others, produced Don Olymbrio, Voice, OO Seven and Barbria. Plus, Elbria E is the half-sister of the approved stallion Kyton. “By now, Philina Bria has turned two, although you would think she is a year older when you look at her. She has developed so beautifully. She is sharp and is a great mover. Unfortunately, I had to say goodbye to Priscilla Marein.”

A year later, Conny bought two colts in the Early Summer Collection of Foal Auction Borculo: Rens L and Rolex. The chestnut Rens L (Lord Romantic out of Idamora L ster preliminary keur D-OC by Apache) is bred out of the damline of the KWPN stallion Jayson (s.Johnson), Feel Good (s.Contango) and El Capone (s.UB40). The black Rolex (Fontaine TN out of Lawanda elite IBOP-dres D-OC by Governor) is closely related to the KWPN-appointed stallion Imperio Platinum (s.Johnson). “Last year, I ensured myself a seat with a good view at the video day. The footage was again recorded at our stable and I immediately took a liking to Rolex and Rens, already off-camera. I am excited to see how these foals are going to develop.”

Conny’s aim at Foal Auction Borculo is to acquire young dressage talents for herself and to build up a supply of interesting sales horses. “For sport, I immediately check if a foal has elasticity in his movement and if he can package his stride. Plus, not entirely unimportant, that the foals has got the looks and a pretty head!”

The foals are in rearing at Lelymare Horses but are also stabled at Conny’s during the first six months. “I teach them all sorts of things, for example trailer loading. I work together with Tristan Tucker, and I also use his training method on the youngsters. It really benefits them and it’s fun to do, too. I have ridden various problem horses in the past and I like that these young horses offer a clean slate. Right from the start, I can try to train them as well as possible.” 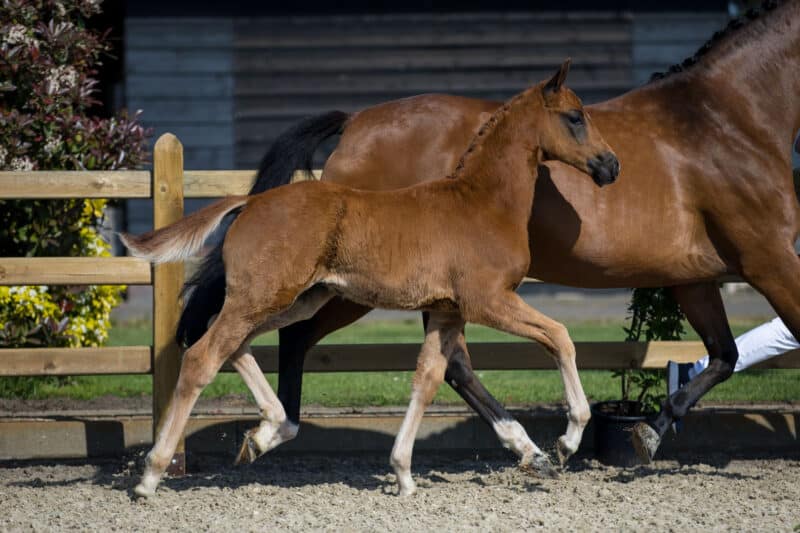 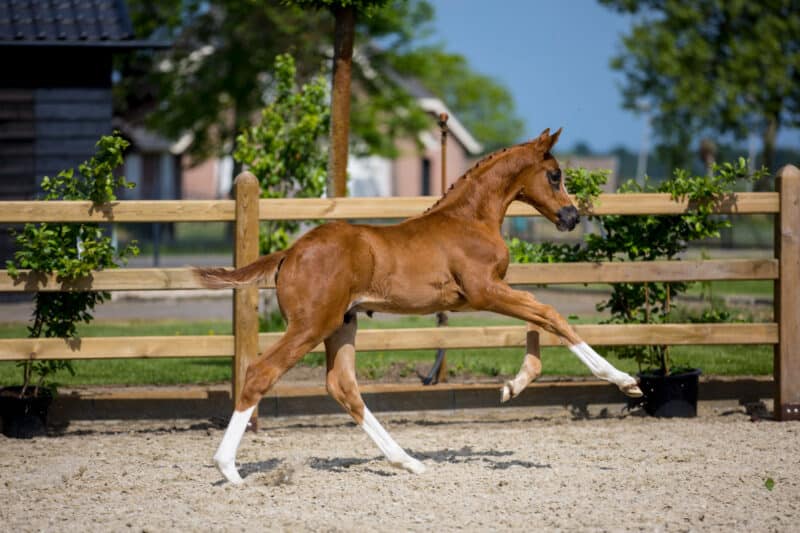 Over the years, Foal Auction Borculo has gained the reputation as one of the most prestigious and respectable foal auctions of the Netherlands. Conny loves to attend the event. “I like that the foals have been selected by people that have a lot of expertise and knowledge. Foals do not make the selection just like that, they are of high quality and have been carefully examined by the veterinarian. This gives me a confident feeling. I really like the collaboration with Foal Auction Borculo. The communication with Annelou de Man of the organisation is great. She keeps the buyers updated in a very professional manner. Next year I hope to buy two more foals. I do not attend other foal auctions, because at Foal Auction Borculo I always succeed in my search”, concludes Conny.

Would you like to buy a top foal as well? Elite Foal Auction Borculo auctions a superb collection of 75 foals on August 24 (jumping) and August 25 (dressage). Browse the full dressage collection here or click here to view the jumper collection.