Only one day to go before the Borculo CSI Foal Auction is about to begin. The second edition of this auction of exclusive jumping foals will again take place in the appealing entourage of the CSI Jumping Schröder Tubbergen (photo). The entrance is free and visitors can expect an attractive program. The evening program starts at 4 pm with Friday’s main class: the Big Tour 1.45m. During the break of this Longines Rankings class the foals’ presentation is scheduled and the auction itself will start directly after the end of the jumping program. People who are not able to be present at the show ground of the BWG Stables in Tubbergen, but would like to follow the auction, don’t have to miss anything during the online live broadcast on www.ClipMyHorse.tv.

During the Borculo CSI Foal Auction, a total of seven particularly interesting foals – all WFFS tested and no carriers- will come under the hammer. We have listed them below. Six foals -excluding the wild card foal- can also be seen in action through this YouTube playlist.

Like last year, we’re starting this edition of the Borculo CSI Foal Auction by auctioning an auction piece for charity. The revenue will go to the “You never walk alone” group, which is participating in the ‘SamenLoop voor Hoop’ on 21 and 22 September in Tubbergen, an initiative by KWF Fight against Cancer. Especially for this beautiful charity, the Dutch Erna Visser Gallery and Studio has created a very beautiful bronze sculpture (photo) available for the highest bidder! 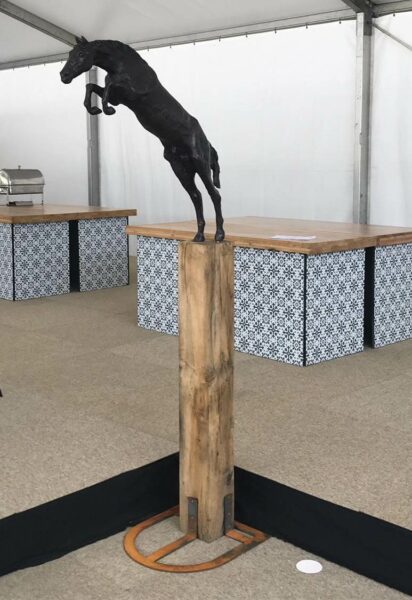 During the Borculo CSI Foal Auction a small collection of very exclusively bred jumping foals will come under the auction hammer. All of this takes place at the international top show Jumping Schröder Tubbergen. This show is organised by the BWG Stables of the Schröder brothers Wim, Ben and Gerco and is located at Reutummerweg 43a in Tubbergen.

In 2018 we introduced this new auction, at that time named Borculo JST Foal Auction. With an average of € 16,000 the concept of auctioning top foals in this setting turned out to be a direct hit.