For nearly twenty years the jumper foals of the Van Ginkel family of Wilp are auctioned at Foal Auction Borculo. The past few years they have been remarkably successful with the Voltaire-mare Tialitha. For the third consecutive year, an offspring of her and Cicero Z van Paemel is part of the elite foal auction.

Bertus and Magda van Ginkel started a dairy farm in Wilp fifty years ago. Nowadays, it is an organic farm which is run by their son Bart Hein. “My father is 85 years of age, but still closely involved in the horses. Breeding is a joint effort. It all started when my sister and I took a liking to riding ponies. Later, we got a horse and decided to breed a foal as a hobby. About thirty years ago we welcomed a few quality broodmares and ever since we have bred about three to four foals a year”, tells Bart Hein.

Via Foal Auction Borculo, the family sold over fifteen foals out of two different lineages. “We used to have success with a Nimmerdor mare, but we have stopped breeding with that damline. My sister still has an offspring of that lineage, however. My father and I are only breeding with the Bryolieta-line now.” The pillar in the breeding program of the Van Ginkel family is the elite pref prest sport-spr PROK mare Tialitha (Voltaire x Libero H). Her foals have drawn attention during the last few editions of Foal Auction Borculo. Phialitha (s.Cicero van Paemel) was sold for 17.000 euros in the 2020 online auction and moved to a Swiss owner. Full sister Rialitha (s.Cicero van Paemel) yielded 19.000 euros last year and left for Hungary. “Tialitha produced two offspring by Balou du Rouet in 2017 and 2019. Those foals were also auctioned at Foal Auction Borculo, at the time still in Vragender.”

“This year our colt Sicero was selected for the auction. He is also an offspring of Cicero Z van Paemel. This combination is simply a very good match. The foal seems very good: elastic, uphill modeled and the same dark colour as his dam. A jumper horse does not need a good trot, but for the sale it does come in handy. And this foal ticks that box too, he is the total package!” Tialitha has turned 22 this year and is covered by the same stallion once again. “She was in foal after one insemination, she is a very fertile mare. For next year we hope for a filly. We would like to keep that as a successor.” 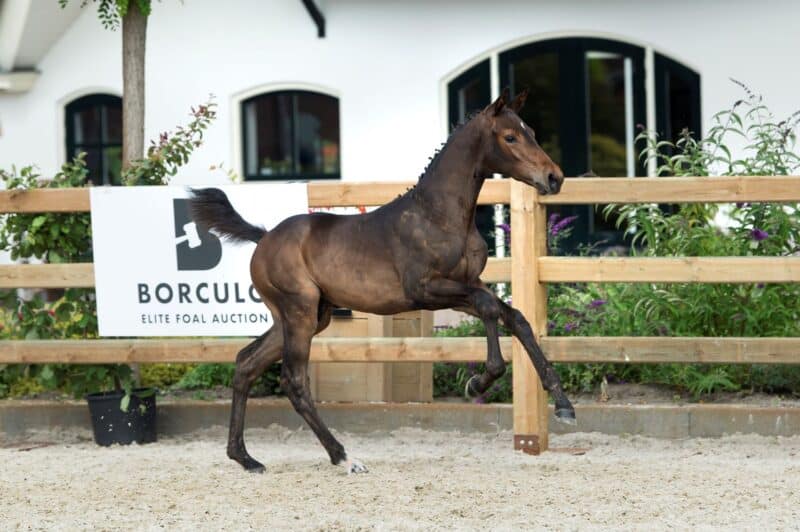 Tialitha is bred by G. Gerbrandy of Wommels. Bart Hein: “As a four-year-old she produced her first foal. In terms of breeding there has not been much of a hiatus. She has not been covered for one or two years because she was then competing in the higher levels of sport with Stefan Haarman. Pretty quick after the birth of a foal we started riding again, it never caused any issues. In the lower levels we were a true sight to behold. We would milk Tialitha right before she would enter the ring to get the tension off the udder. Old-fashioned, like they often did it in the seventies. It worked fine for her!”

Sport and breeding went very well together for this KWPN mare. She jumped at 1.35m herself and has so far produced no less than seventeen offspring. Including Emiel (s.Campbell VDL) and Farah Diba (s.Berlin). Both horses jumped in the international 1.40m classes. Sport is deeply embedded in this damline, since granddam Monalita (s.Libero H) not only foaled Annalita (1.50m), she is also a full sister of Nathalita (1.60m, Abdullah al Sharbatly). “Talitha is still tough as nails on her legs. You notice it in her offspring too. They are all healthy and pass the x-ray examinations.”

Bart Hein is very satisfied with the cooperation with Foal Auction Borculo. “It’s super! We always had pleasant contact with Floris van Leuken and Pieter-Jan Berkers of the selection committee. In the meantime, the team of selectors has changed, but the relation remains good. The auction is organised well. You always get some nice feedback, also during the auction itself. We welcome the change to an online auction. I think the buyers have gotten used to it as well. I think it is a big plus that the footage taken of the Borculo foals is so extensive. For example, when it comes to the leg positions, people can see what they are buying.”

For the family, an online auction only has its advantages. “Since I have a farm, it is difficult to be away from home for an entire day. It is very convenient the selection committee visits the foal at home. We now only had to hit the road for the photo and video day. My parents are a bit older now so for them this is ideal. They cosy up on their sofa with a glass of wine and some cheese to watch the auction unfold.”

The family still has two broodmares out of Tialitha in their stable. “Cialitha is registered to my name and is sired by Argentinus. She has a colt by Harley VDL at foot and is in foal to Untouchable 27.” In addition, the family breeds with Lialitha (s.Balou du Rouet). “She currently has a foal by Cicero Z van Paemel and is in foal to Kassander van ‘t Roosakker.”

Bart Hein prefers to sell his breeding products as a foal. “At the auction or at home. If a filly must stay on, that’s not the end of the world. But a stallion in our stables is just not a good fit. If one does not get sold, my mom springs into action. She phones around. She has a little phone book with all the numbers of people that once bought a foal from us. She is very good in PR and sales and is super enthusiastic. My father has the final vote in the stallion choice my mother covers the business side. That’s wonderful. Of course, it’s a hobby and a hobby may cost some money. But this hobby has certainly cost us no money in all those years, partially thanks to the good auction proceeds.”

Breeding is a family matter in the Van Ginkel family. “My wife, sister and brother-in-law all have an affinity for breeding. All our birthdays happen to be in spring, so during the birthday parties we mostly talk about stallions. I always pick a stallion for my Argentinus-mare early spring and then stick to it. The rest of the family tends to switch sometimes”, concludes Bart Hein with a smile.

Every year, a strict selection ensures only the very best dressage and jumper foals fall under the gavel in one of the auctions of Foal Auction Borculo. Read more about the auctions.