In 2017, they already were among our Elite Foal Auction’s eyecatchers and now, two years later, Make My Day and Monteverdi again impressed at the recent edition of the Westphalian Stallion Show. Make My Day (picture above, Glock’s Toto Jr. x Apache) in particular was among the absolute public’s favorites in Münster-Handorf. His excellent performance not only tempted the judges to an approval but also to give a premium to the 2.5-year-old talented stallion owned by Eugène Reesink and Mathieu Beckmann. The result also was a new success for M. Konijn-Egas, breeder of the Toto Jr. son out of his elite dam Garonette. As a foal Make My Day was sold for € 41,000 at our auction.

Auctioned for the second time

Monteverdi (picture below) was a top lot too at the 2017 auction, with an amount of € 36,000. His breeder W. van de Heuvel combined sire Vivaldi with the interestingly bred dam Gorgeous Vurona (by Fürst Heinrich). After his Westphalian approval the chestnut stallion came under the auction hammer for the second time in his life. Again he was sold for an absolute top price and collected € 110,000 for his owner Eugène Reesink. 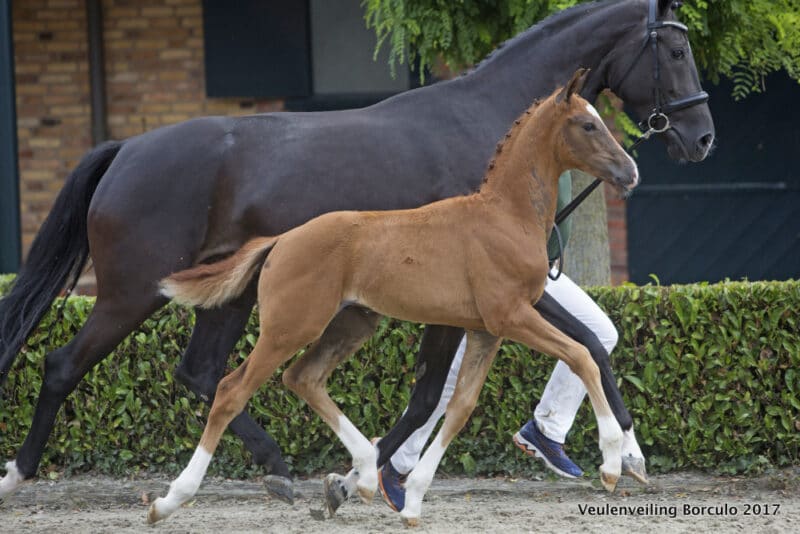 A week before the spectacular successes in Westfalen, another remarkable result by a former Borculo foal was noted. The mare Funkenmarie (For Romance I x De Niro), in 2016 auctioned for € 18,000, finished her KWPN mare performance test (EPTM) with the magnificent score of 93 points. The German breeding product of J. de Baey, owned by Marja Vanderstappen-Keijzer, also obtained the elite predicate afterwards, with no less than 90 points for her confirmation and 95 for movement.

All the above mentioned fantastic results are worthy of a big congrats to the breeders and owners!