Foal Auction Borculo is known to offer well-bred foals out of exclusive sport lineages. And that vision has proven successful since these foals often find their way to the highest levels. This week Lucardo O (s.Eldorado v/d Zeshoek) makes his appearance at the WC for Young Jumper Horses and that calls for an interview with his breeder Peter Oosterbosch.

The breeder of Wintelre has become a familiar face at Borculo. His carefully constructed breeding program has generated multiple Borculo-foals over the years, including Lucardo O. “I have been breeding for about four decennia now and have attended Foal Auction Borculo many times in that period. I auction both dressage and jumper foals and they are all bred out of the Bryolieta-line. I remain loyal to that lineage as it has always given me the best results.”

In 2016 Peter Oosterbosch supplied two jumper foals in the Borculo collection; one son of Eldorado v/d Zeshoek and a colt by Grandorado TN. Both foals have developed into six-year-old showjumpers that take on the international 1.30m courses. Larado (s.Grandorado TN) is campaigned by Ruben Romp and Lucardo O (s.Eldorado v/d Zeshoek) has qualified for the WC in Lanaken for the second consecutive year. Lucardo O was sold to Al Shira’aa Stables in the Borculo auction, and the gelding is still owned by that stable. During last year’s WC, Lucardo O was presented by their Irish stable rider Aoife O’Connor, this edition the Eldorado v/d Zeshoek-offspring is contending for the medals under the guidance of Abdulla Al Marri (UAE). “It is great that Lucardo O may compete in Lanaken again, it must mean he has plenty of jumping qualities. I am not good with computers nor the internet, so I am unable to keep tabs on the horses I have bred. Luckily, some people in my circle keep me updated. That’s also how I heard of Lucardo O’s talent. Willem van Hoof, who frequently visits the UK, had seen him at a few shows there and told me he was jumping very well.”

It all started at the end of the 80s with the Renville-mare Elita, reflects Peter Oosterbosch: “I bought Elita as a yearling for 7500 guilders, that was a lot of money at the time. Unfortunately, she went completely blind shortly after, but she still obtained the ster predicate following my voice. I have bred quite a few foals out of her, one of which was Randgraaf (s.Burggraaf) that jumped at 1.60m height. Elita has stayed here until she was 24 years old. Her last offspring was Zelita (s.Heartbraker), which I intended to sell as a foal. However, no auction was interested so I decided to keep her myself, in hindsight that worked out for the best! Zelita is a quick mare, but not too big as you may expect from a direct Heartbreaker-offspring. I initially covered her twice with Verdi and I was happy with the foals, but I was looking for a bit more mass. Eldorado v/d Zeshoek caught my eye, a beautiful stallion, and he had a low stud fee back then. It turned out to be a good match, so I have repeated that combination nearly every breeding season so far.” A good choice, as is evidenced by the Eldorado v/d Zeshoek-mare Halita O that is currently active at 1.60m level with Petronella Andersson. “Lucardo O is the fourth international showjumper out of Zelita and the third that is a result of a cross with Eldorado v/d Zeshoek.” 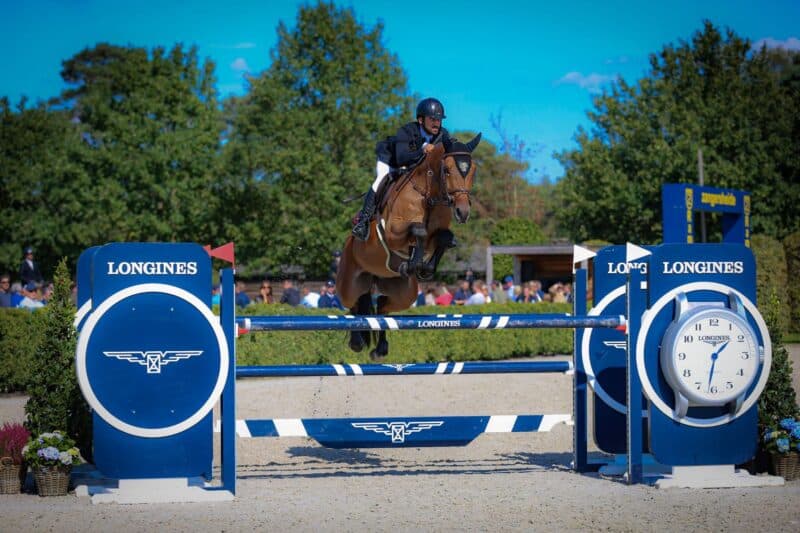 Not too long after the purchase of Elita, another mare out of Bryolieta-line was added to Peter’s stables. “I first bought a Zeus-mare but had a stroke of bad luck with her so I acquired Halita (s.Damiro) in North-Holland. One of the first offspring I bred out of her was Olita (s.Boy B), with whom I started both a dressage and jumping branch. The penultimate offspring of Halita was Fiolita O (s.Verdi), she produced the aforementioned Larado O (s.Grandorado TN) of Ruben Romp and supplied a foal of Highway M TN (picture) in this year’s Borculo auction.” 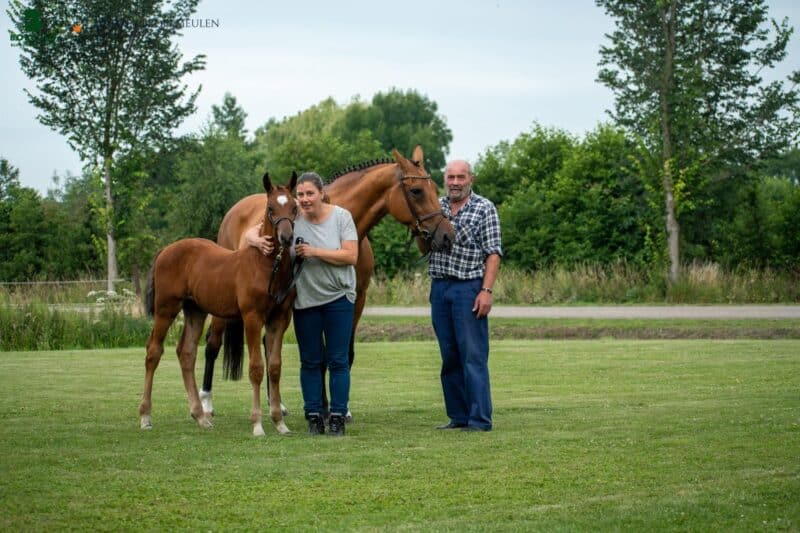 Peter Oosterbosch auctions both jumper and dressage foals at Borculo, all bred out of his beloved Bryolieta-lineage. “The Boy B-mare Olita foaled Valentijn O (s.Ferro) that advanced to the final for seven-year-olds in Lanaken and later reached the 1.60m classes. However, she is also at the origin of all my dressage foals. I breed with a Rousseau- and Johnson-daughter and Bordeaux-granddaughter of Olita. The stallion Fontaine TN seems a good fit for these mares, I already sold multiple foals sired by him at Foal Auction Borculo. Last year, Roitaine O out of the Bordeaux-mare Ilita O was sold to Helgstrand for 34.000 euros”, says the proud breeder.

The passionate breeder expects five foals in 2023. “I always use stallions of Team Nijhof, I have been in business with them over thirty years. Nex year, I hope to welcome two Fontaine TNs, one Florida TN and two foals by Eldorado v/d Zeshoek. One out of Zalita, so that would be a full sibling of Halita O and Lucardo O. I kept two young mares of that same cross, so I have decided to sell all the foals that are born as of now. Hopefully they can meet the selection requirements of Borculo because that would mean you see me again next year!”, quips Peter Oosterbosch.

Every year, a strict selection of the best dressage and jumper foals fall under the gavel during the auctions of Foal Auction Borculo. Read more about the auctions here.