Top lot Tavi Z (Tobago Z x Chellano Z) was responsible for a fantastic bid on the Borculo Elite Foal Auction’s first day at PSC Lichtenvoorde in Vragender, Netherlands. The grandson of the famous mare Larthago brought in € 35,000 and fell into American hands.

Just like this colt by Tobago Z out of an excellent dam line, the exclusive blood turned out to be popular on this evening entirely in the light of the jumping foals. The filly Oklalottie W (Tangelo van de Zuuthoeve x Nabab de Rêve), whose dam is a sister to golden Olympian Vindicat W (Peter Charles), made auctioneer Frederik De Backer’s hammer fell on an amount of € 26,000. Out of the same dam line Oberlottie W (Verdi TN x Emlion) was purchased by Jonny Roelofsen from Borculo sponsor partner Roelofsen Horse Trucks.
A fierce bidding duel also took place around Orage. It stopped at € 23,000 for this filly by Cornet Obolensky, who shares her Voltaire dam with Briljant (Katharina Offel). The € 20,000 mark was also reached at Onthargos van ‘t StuDutch. This striking colt by Conthargos is bred out of the dam Honey Pearl (s. Emerald), a sister to Cold Play (Fredrik Jönssen).

A novelty during the Borculo Elite Foal Auction’s 40th anniversary was the possibility to also bid online. This happened with several foals. The highest online bid of the evening went to Mr. Maicandy van HH (Malito de Rêve x Darco). The grandson of the legendary Candy (Pieter Devos) brought in € 16,000.

Foreign buyers were clearly active during this auction. Foals found new owners from Switzerland, Portugal, Germany and the United States. The latter country was responsible for a winning bid from a well-known NBA basketball player.

‘This is just fantastic’

Top lot Tavi Z will also cross the Atlantic. His breeder Rudy van der Bruggen was a truly happy man after the auction. “This is just fantastic. Tavi’s dam line has already given us so much and this is another great moment, although for sure you always have to be lucky. We really believe in Tobago Z as a breeding stallion. He is so superbly bred and performs great in sport nowadays. He seems to be a good combination with this broodmare. Tavi has been a striking foal since day 1 and we’re happy that we expect his full brother or sister next year. ”

Jan Markink was another happy man on this evening. The president of the Elite Foal Auction Borculo Foundation thanked the buyers present who made the average of € 10,700 possible. Finally, he was looking forward towards the second evening of the Borculo Elite Foal Auction, which will be dominated by dressage foals on Thursday 29 August. Look here for all the results. 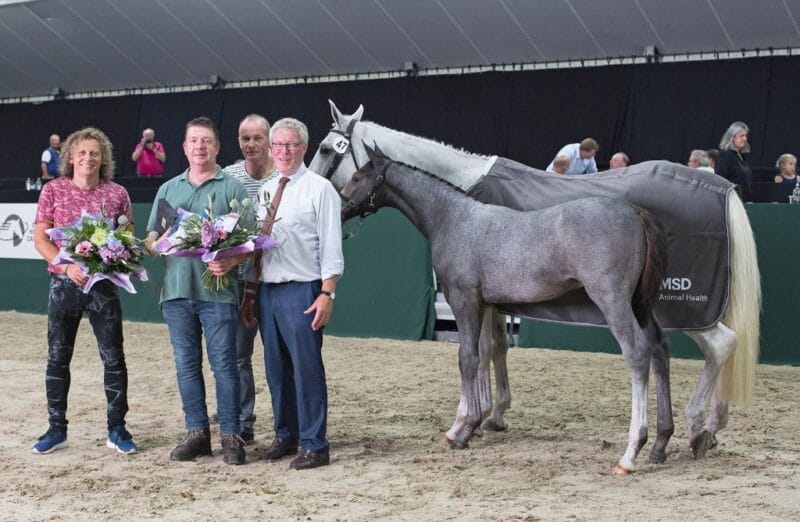